Everyone loves fish in my family, especially Macey

If ever there was an ingredient I was born to embrace, it’s fish.

One of my grandfathers was a seafood chef. The other had a fish shop at Wynyard. I learnt how to catch, gut and cook a fish before I could do anything else useful with food. And tuna salad is my default lunch.

Scaling and gutting a leather jacket

Okay maybe that last one doesn’t count, but in essence I eat more than my share of fish and love it in any shape or form, raw or cooked, from head to tail. Especially the tail. Not to mention the skin, cheeks and eyes. Yes eyes! That’s what my dad taught me and his dad taught him so I never raised an eyebrow : )

I went fishing recently and am glad to see I can still reel ‘em in. The only way (in my family at least) to cook freshly caught fish is on the barbeque with oil, lemon and occasionally garlic. The oil and lemon form an unctuous sauce which is heaven against the crispy fish skin.

But there’s so much more you can do with fish and it’s one of my favourite things to experience when I travel (provided there is a body of water not too far away – I generally stay away from seafood in landlocked countries). 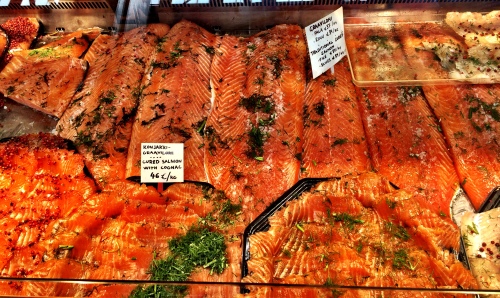 Given the vast seas around them, it’s no surprise that the Scandinavians know a thing or two about fish. I almost wept at the sight of beautiful displays of salmon in Helsinki, radiating a signature peachy-orange glow.

Salmon is either cold or hot smoked: for the former the smoke only flavours the fish and is not thermally cooked, for the latter the fish is flavoured and thoroughly cooked as the temperature is over 80 degrees.

The Finns also know exactly what to do with their smoked salmon. It’s delicious on its own but my favourite way to eat it is on rye bread with dill and a nice thick layer of butter. 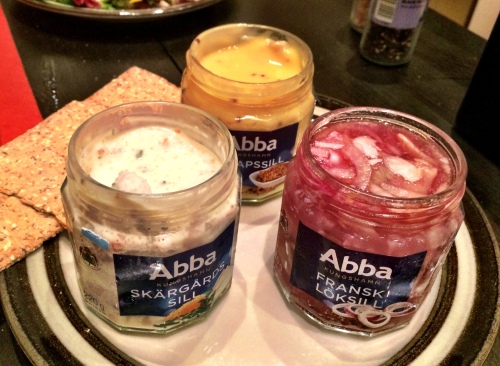 My favourite herring comes in a range of flavours

Nearby in Sweden, the fish most obsessed about is herring. With its high oil content it goes rancid within hours of being caught which is why the Swedes have been pickling the stuff since the Middle Ages. Experience a traditional Swedish smorgasbord and you’ll see that it gets completely hijacked by herring pickled in a myriad of sauces. Popular flavours include mustard, garlic and dill but I’ve also seen more adventurous variations including beetroot and cranberry. 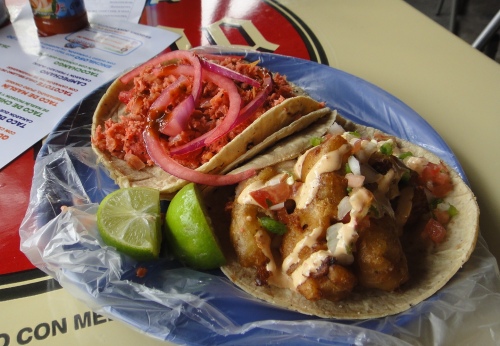 Long before I travelled to Mexico, I heard about the infamous fish tacos. But I didn’t get it. The idea of fresh fish wedged in a taco didn’t make any sense to me. Once I realised the fish is fried I was totally on board.

Like all sensible street food, it’s performed before your very eyes so the fresh fillets and hot crispy batter immediately form a love affair with creamy mayo and shredded cabbage. It’s a match made in seafood heaven. And cheap as chips. 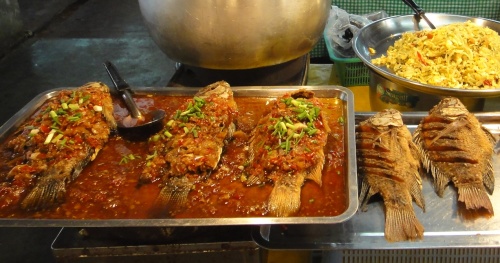 Whole deep fried fish is something I’ve never attempted to make. The idea of having a bubbling vat of hot oil in the vicinity is slightly disconcerting. I have no qualms in eating it out though, especially when it’s matched with an intensely spiced sauce which is something Asian cultures do so well.

It’s a common dish in Thailand and I tried it in Chiang Mai. Fleshy white fish is scored and fried whole, then immersed in a sauce rich with red chillies, garlic, tamarind and fish sauce. The crunch of the crispy skin is a wonderful contrast to the delicate flesh.

My barramundi is standing to attention

I also tried something similar in Sydney at Garfish – crispy fried whole barramundi with tomato masala, coconut cream and mint. The most arresting element of the whole dish was the ‘standing’ position of the fish which looked like it was mid swim. Clearly there was something clever going on in the deep fryer. Certainly made for a nifty piece of theatre!