How much do you know about Georgia?

The country nestled under Russia in the Caucasus that is, not the US state.

In all truth I previously knew only one thing about Georgia. In 2007 a little Georgian lass came fourth in Junior Eurovision (for under 15s), and on her return to Georgia she was welcomed like royalty. The Prime Minister even came to meet her at the airport, such was the enormity of this occasion.

Any country that treats its fourth place Eurovision winner like a god is solid in my book. 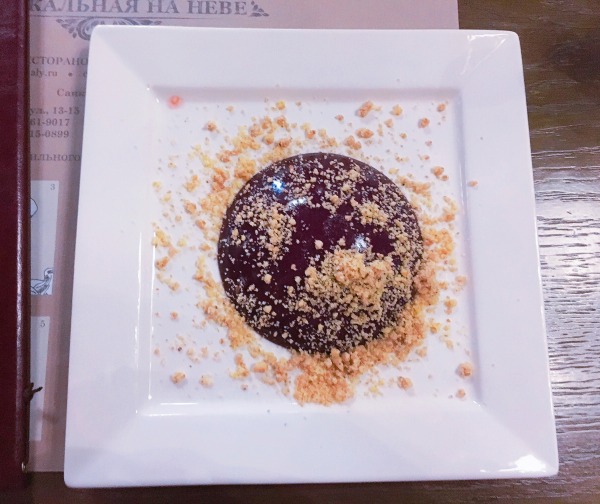 Pelamushi is a typical Georgian dessert

At this point I have to fess up and make it clear that I haven’t been to Georgia. BUT, I have just spent two weeks in Russia, in which Georgian food takes a starring role.

There seems to be a few reasons for the proliferation of Georgian cuisine. Firstly, it’s damn good. The benefit of sitting smack in the middle of the ancient East-West trade routes was being able to take your pick at the best of what was passing by, be it pillowy Turkish-style bread or Mediterranean salads. I’d argue that the cuisine is far more sophisticated than Russian food, which is hearty but more rudimentary in its approach to flavours. 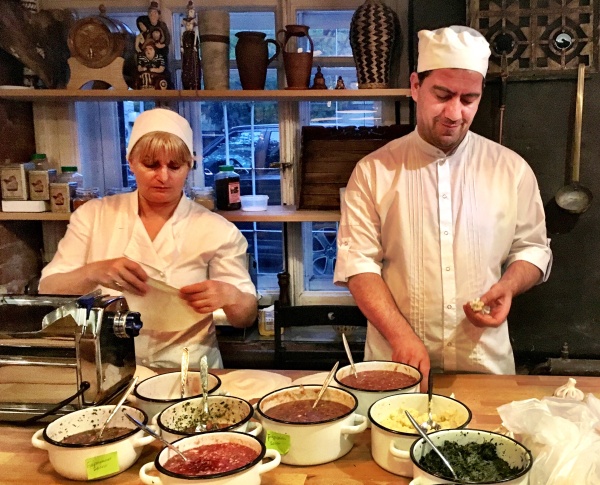 There’s also the Stalin factor. His influence can still be felt across the country, despite the momentous changes since his death in 1953. Just visit the Moscow metro which he designed as an interconnected web of museums ‘for the people’, which features his face at every opportunity. Stalin was from Georgia, so this undoubtedly influenced this prevalence of Georgian restaurants throughout the 20th century.

Therefore it’s not at all hard to find a Georgian restaurant in the main Russian cities and you’d be wise to seek one out at least once. I did just this on my first night in Moscow and subsequent nights in Saint Petersburg. It’s possible that I ate at more Georgian restaurants than Russian restaurants. Don’t tell Putin okay?

I narrowed down my favourite dishes to seven – and to be honest I didn’t even really go to town on some of the meat dishes the cuisine offers. And have I mentioned how much I liked the wine? There’s no question that I need a trip to the source to explore this delicious cuisine even further.

Khachapuri made with sulguni cheese and butter

My first thought when this molten cacophony of bread and cheese was presented was its likeness to Turkish pide. This version was topped with the crumbly brined Georgian cheese called sulguni, along with chunks of another cheese.

But wait a minute. I gulped and soon realised that the giant yellowy chunks weren’t cheese, they were butter. Meant for swirling through the cheese, just in case you weren’t already in the throes of a dairy overload. Butter, cheese and carbs – does it get any better? 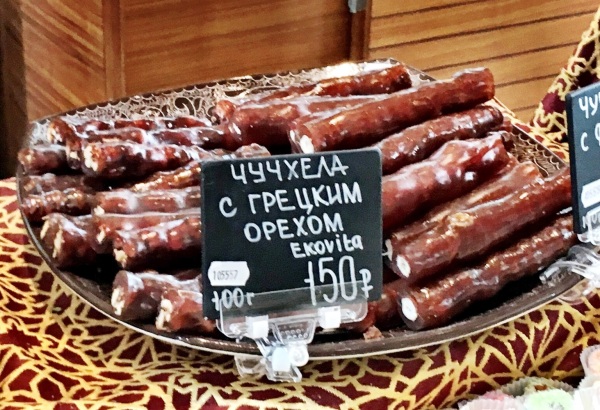 Strange looking food excites me. The more alien it looks, the more I want to try it. Thus I was stopped in my tracks at the local markets when I spotted these bumpy colourful strands which were so waxy they could have been candles. On the contrary, these are a signature Georgian sweet comprising of a string of walnuts covered in concentrated grape juice. A time consuming but ingenious way of using up grape juice left over from harvest. I never really found out the correct way to eat these, and ended up just biting off chunks and pulling them off the string with my teeth. Messy but tasty!

Khinkali are so important in Georgian cuisine that many restaurants specialise only in these iconic soup dumplings. Tradition dictates a minimum of 20 folds in each dumpling but the genius part is the built in ‘handle’ that allows them to be eaten by hand in a minimally messy fashion. 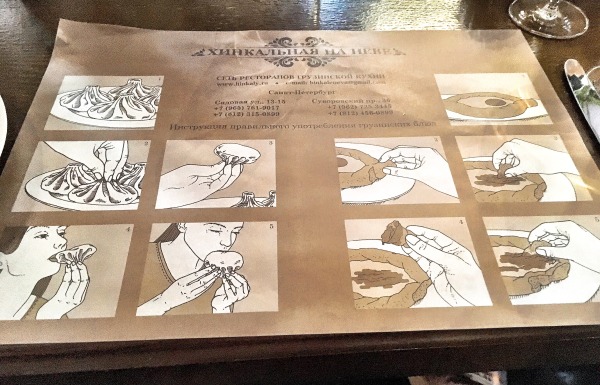 Khinkhali-handling instructions are supplied for the uninitiated

The tried-and-true technique requires diners to grasp the top where the pleats meet, bite a small hole in the side and slurp out the broth before devouring the filling. No one really fancies a mound of tough pastry so the top is then discarded. It requires coordination and impeccable timing – bite too quickly and you burn your tongue, dillydally and you’re left with a tough dumpling. One of the restaurants I visited was kind enough to provide a step-by-step guide to this technique.

Pkhali made with spinach and topped with pomegranate seeds

Georgian cuisine is a godsend for vegetarians. In fact of the 12+ different dishes I sampled across the board, only a few featured meat. I particularly liked the vegetable pâtés or purees known as pkhali, made with fresh vegetables, ground walnuts and eye-watering quantities of garlic. They reminded me of Greek melizanasalata which technically means eggplant salad but is more of a dip. They came in bright greens, pinks and oranges, depending on the vegetable, always topped with a sprinkling of ruby red pomegranate seeds. 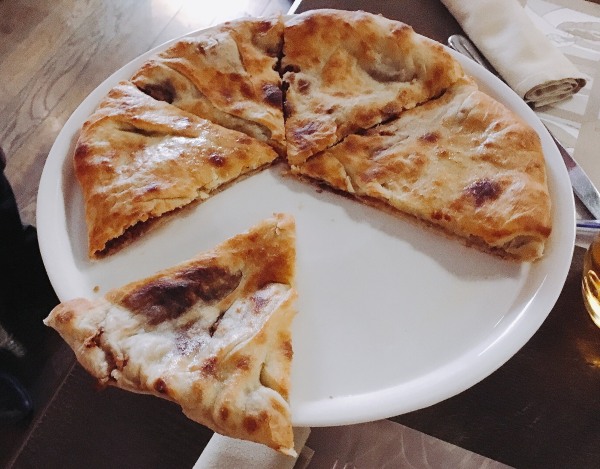 This is the ultimate Georgian street food, available from hole-in-the-wall bakeries on every street corner according to my friend Garry. I ate mine with a knife and fork in a restaurant but could still appreciate the flaky pastry stuffed with slow cooked spiced beans flavoured with bacon. The filling was like a refined version of refried beans and so tasty alongside the buttery pastry.

When I spotted pelamushi on one menu, I instantly thought it sounded like Greek moustalevria and I wasn’t wrong. Made from concentrated grape juice (just like the churchkhela) boiled with flour, the two desserts are almost identical with the exception of the topping – the Greeks use sesame seeds and/or cinnamon and the Georgians use crushed walnuts. I wonder if the Georgians borrowed from the Greeks or vice versa? Either way the dessert has a lovely thick jelly texture and natural sweetness. None of my dining companions seemed to like it as much as I did but I suppose I’ve been conditioned to liking that style of flavour and texture.

I remember eating fruit roll ups as a kid and getting my teeth stuck in the sticky sheets. I suspect those versions had more sugar than fruit so it was a pleasant surprise to discover that the Georgian version is pure fruit; pureed, spread into a sheet and dried in the sun. I didn’t manage to track down a sour plum version but I hear it’s quite the treat. I brought a few home with me and literally can’t get enough of tearing these into fine strips and eating them. I’m not sure how traditional that is, let’s call it my own Georgian eating style!