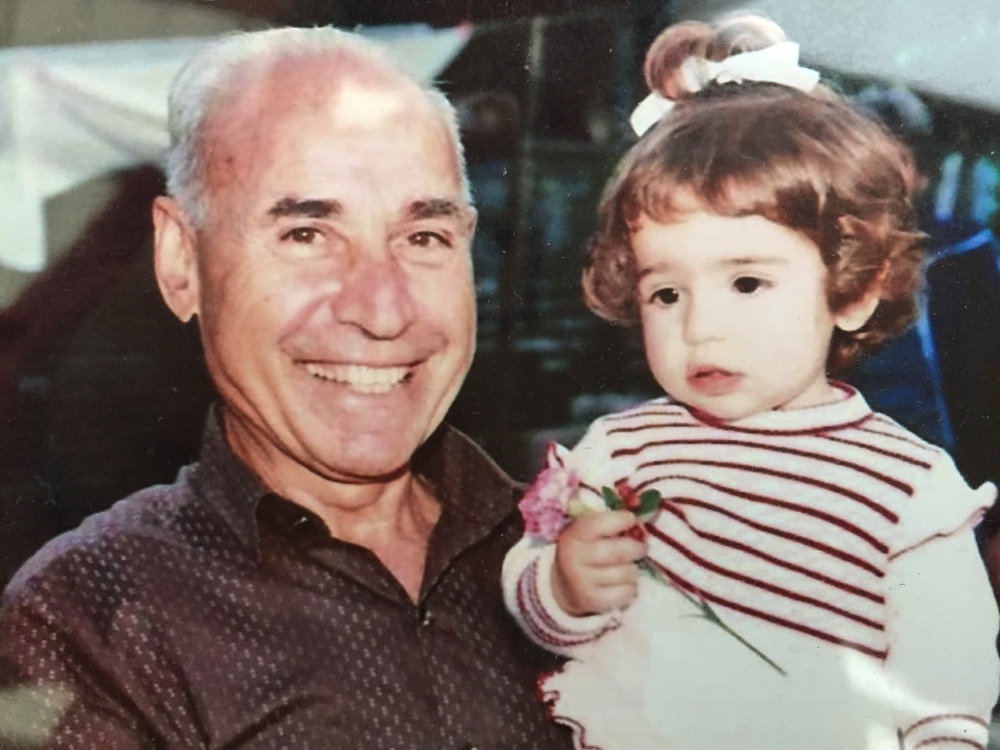 I really wish I had known my grandfathers.

They both died when I was a toddler so all I have are some old 80s-style photos of them holding me proudly in their arms.

Despite not knowing them I am pretty sure my love of food stems from their influence: one was a seafood chef at The Royal Automobile Club, amongst other places, and the other ran a fresh fish shop in Sydney’s Wynyard Station which was the place to buy fish in the 60s. It’s now a McDonald’s.

These weren’t uncommon career paths for Greek immigrants, who came to Australia with nothing but the determination to succeed and a little ingenuity. Food was a way for new migrants to assimilate into the community and find jobs, even when they didn’t speak English. Many also came via America or had family in America where they’d picked up culinary ideas that were ripe for applying to the Aussie market.

The fantastic book by Effy Alexakis and Leonard Janiszewski

My ears pricked up when I heard about a new book by historian Leonard Janiszewski and photographer Effy Alexakis that delves into the impact that Greeks have had on the café culture in Australia. The book compiles the stories of many Greek families and looks at the development of eating culture through the lens of the Greek café and milk bar. The book proves that Greeks truly changed the face of public eating in Australia.

As part of History Week (can you tell I’m the daughter of a history teacher?) I went along to a book talk with my Aunty Kathy and was fascinated to learn more about other Greek families in hospitality and their impact on Aussie culture.

It’s hard to imagine how different things once were. In the late 1800s and early 1900s, Australia mimicked the UK and social hierarchy was everything. The rich ate here and the poor ate there. But in Greece, people have always mixed and mingled and eating is about family, delicious food and a sense of community. When the Greeks came to Australia to find a better life, they eschewed the social stratification of the day and opened establishments for everyone.

First it was oyster saloons or oyster parlors (back when oysters were cheap), which they soon transformed with burgers and other foods they’d seen in America. Then they had the ingenious idea of taking soda fountains, traditionally used in apothecaries for helping bitter medicine go down, and making them customer-facing, adding syrups and flavours to create fun and social drinks.

From soda the Greeks turned to milkshakes. New technology in the 1930s and the introduction of the Hamilton Beach Milkshake Maker made frothed milk drinks the beverage of choice. If you happen to have one kicking around from those times they’re worth an absolute fortune now. According to Janiszewski, the Greeks were even responsible for bringing in espresso machines… but it was the Italians who popularised them.

The Black & White 4d Milk Bar in Martin Place was Australia’s first milk bar. When it opened in 1934, 5,000 people lined up for a milkshake on the first day. My Papou Peter, pictured at the top of this story, actually ran the Black & White 4d Milk Bar at one stage. This was the start of a movement – by the end of the decade there were around 4,000 milk bars around Australia. McDonald’s would kill for that sort of market penetration these days.

One of the better known Greek cafés, which still survives today, is the Niagara Café in Gundagai. From 1919 to 1983 it was owned by the Castrission family and my grandfather, Con Castrission, worked there when he first came to Australia. That’s him in the white shirt in the above photo, looking out from the bar. I’d really like to visit Gundagai one day and experience the café that was so influential in my family. My Papou Con went on to run his own café, The Astoria, in Echuca, before coming to Sydney to run Wynyard Fish Supply. 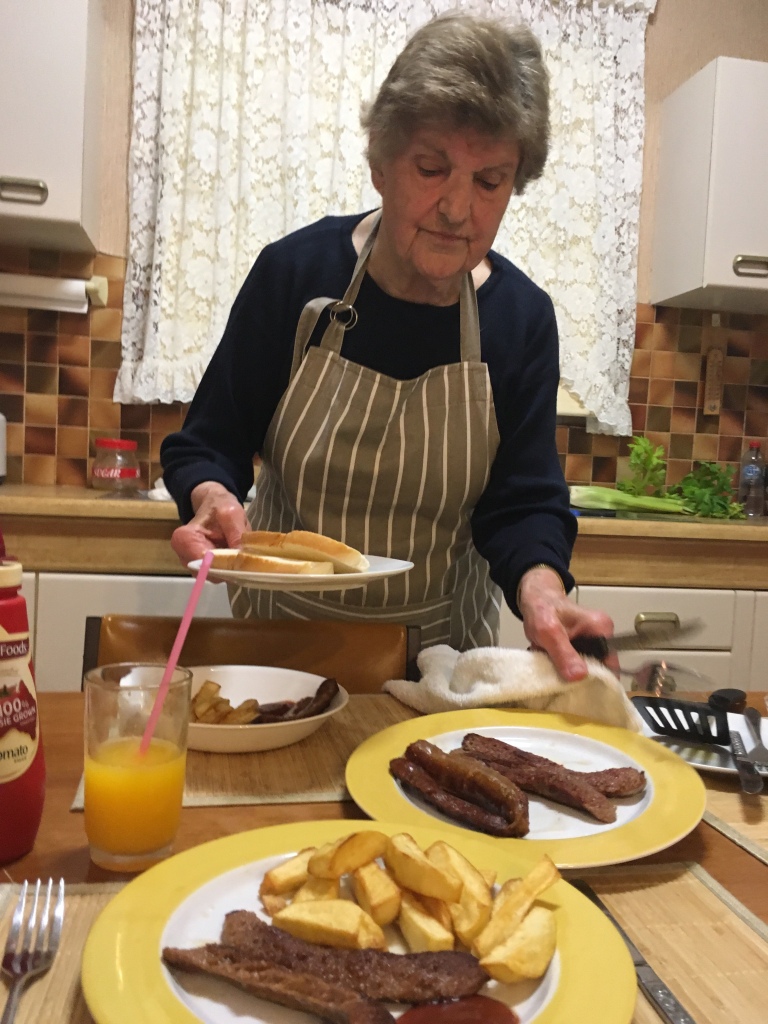 Yiayia Maria serves me sausages and chips. I declined the fried egg

At some point milk bars began to morph into Greek cafés, known as such because of their owners rather than the food they served. The menu offered classic American fare familiar to British-Australians – steak and eggs, chops and eggs, mixed grill, fish and chips. To this day when my yiayia is cooking me something like a steak or piece of chicken, she’ll ask if I want a fried egg on the side. 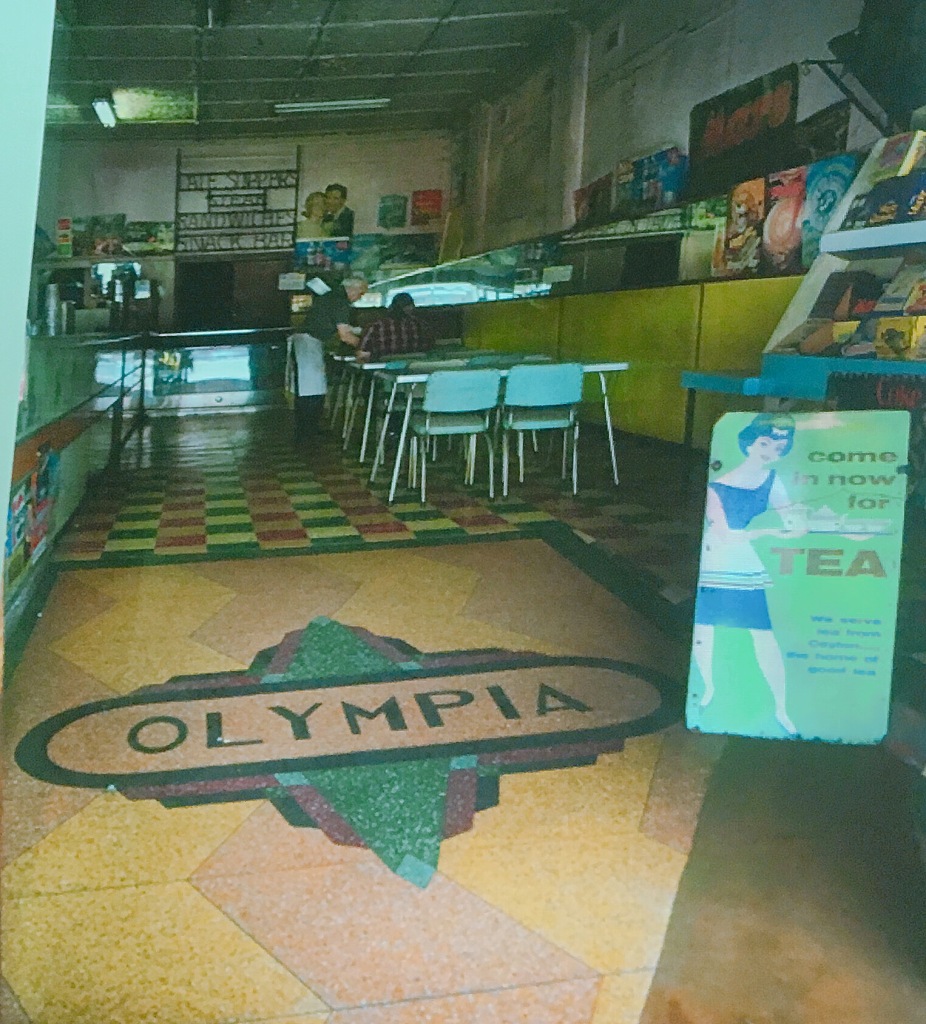 Milk bars and Greek cafés lost their touch in the 60s and 70s. The kids of that first generation of Greeks (like my mum and dad), didn’t want to run milk bars. They went to uni and became architects, teachers, accountants and doctors. And if you wanted chocolates and sweets you could buy them in the supermarket. The last café that my dad’s dad worked in closed in the late 90s. There is one original Greek café left in Sydney, the Olympia, and a handful strewn around the country but they are disappearing fast.

I’m the first person to jump on a new food trend or check out a new café but at the same time it makes me sad that these important cultural landmarks are all but gone. The latte drinkers of today probably don’t know that it was the Greeks who set the ball rolling for the café movement all those years ago, and perhaps they should.