I have a thing for Eurovision parties.

Is it because of my European background? The fact that I embrace sequins and big hair? Was I over exposed to a wind machine at an early age?

I’ve never quite worked it out. But at some point it became a thing for me and I’ve subsequently felt compelled to throw a party in honour of this landmark event ever since. 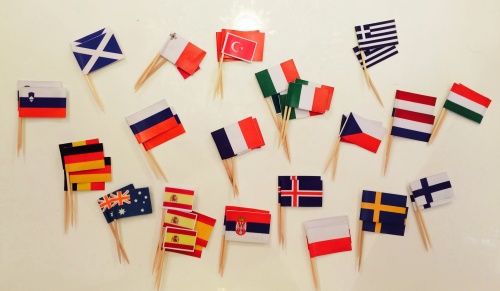 My handmade flags are ready to go

This year I approached things a little differently. Each of my guests was allocated a country and instructed to bring food or drink from that country. I put a lot of thought into the allocation – giving friends a country where we’d travelled together if possible. That’s how I ended up with a dining table practically groaning under the weight of the collective culinary output of the EU. 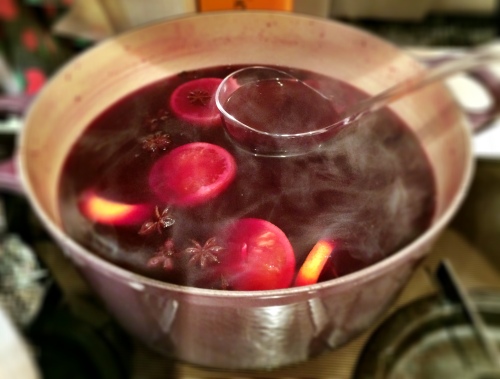 Gluhwein is my go-to Eurovision beverage

As host I decided I would represent Austria (the host of this year’s Eurovision) and Australia.

First up was a heady pot of glühwein, perfect to counter the early winter chill in the air. I cooked the wine for hours with cinnamon sticks, star anise, cloves and slices of fresh orange. Intoxicating.

I couldn’t ignore the national dish of Austria so Wiener schnitzel was always going to be on the menu.

That’s where mum stepped in with one of her pearls of wisdom (I must add it to the list).

Thou shall not fry meat right before thou has guests arriving!

No one likes to enter a room filled with the lingering scent of fried meat but nor does anyone enjoy a stale schnitzel. There was only one thing for it mum declared, she would have to cook it herself and then drop it over right before my party. Bless you mum.

Representing the Aussie contingent were mini meat pies (a party just ain’t a party without party pies) and mini prawn cocktails. I filled shot glasses with shredded lettuce, avocado, dill, added a dollop of mayo and wedged a fresh prawn on top.

My four-tiered tower of Aussie sweets

Representing the other end of the spectrum was my four-tiered homage to our sweet history, made with lamingtons, Iced VoVo’s, Tim Tams, Anzac biscuits and Caramelo Koalas. By the way, has anyone else noticed how flat the topping on Iced VoVo’s has become?

I also snuck in some of this new fandangled Vegemite chocolate – a salty-sweet concoction that polarised my guests. I don’t like Vegemite but I liked this chocolate – strange, no? END_OF_DOCUMENT_TOKEN_TO_BE_REPLACED