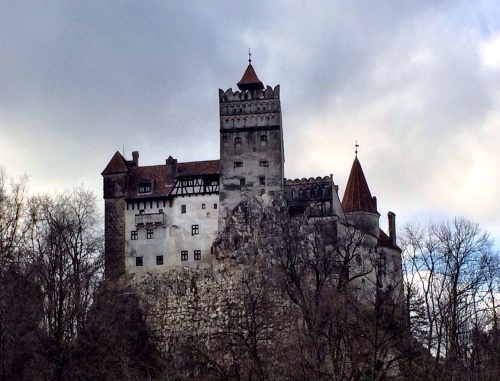 I’ve just returned from a week in Transylvania, the largest region in Romania.

Dracula you say? Well yes, he’s their biggest drawcard. A fictional character based ever so loosely on a 15th century prince who probably never actually lived in Transylvania (at least not in his so called castle), created by a writer who never stepped foot in the country. But who cares? Everyone loves the story and at one point it was the best selling book after the Bible. 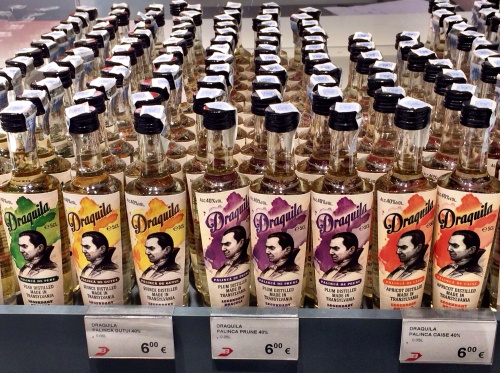 What does Dracula drink? Draquila of course

I was much more interested in the food. Of course. You don’t hear much about Romanian food and even the culture is a bit of a mystery. Due to its location, it’s always been a buffer zone of sorts, sandwiched between big powers like Russia, the Austro-Hungarians and the Ottomans. 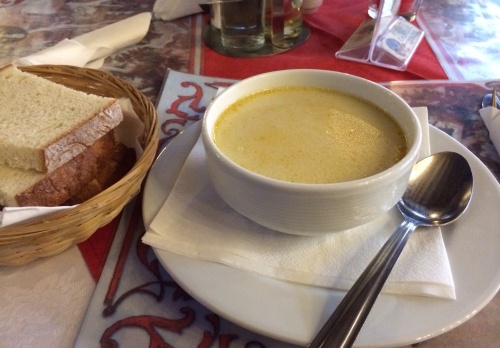 Transylvania was part of Hungary until WW1, after which it was absorbed by Romania. This is why you see a strong Hungarian and German influence throughout the region, along with references to Turkish and Russian culture.

While everyone else chased vampires, I chased down all the traditional dishes I could find and was not disappointed. So here’s a litle overview of my favourite dishes: 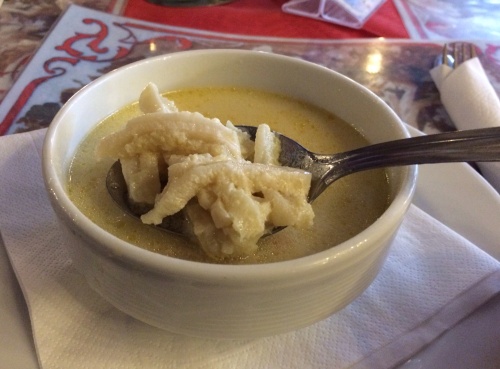 Ciorbă soup: The average temperature while I was there was 2 degrees so I was freezing most of the time. Lucky for me then that no Romanian meal is complete without a soup and their signature is the distinctive sour soup called ciorbă that is soured with vinegar, sauerkraut juice or lemon. I tried a few variations including vegetable, tripe and pork and they were all generously portioned and delicious. Many people baulk at the idea of eating stomach lining (I have no idea why) but even the doubtful would enjoy it prepared this way as it’s thinly sliced and very tender. Trust me! 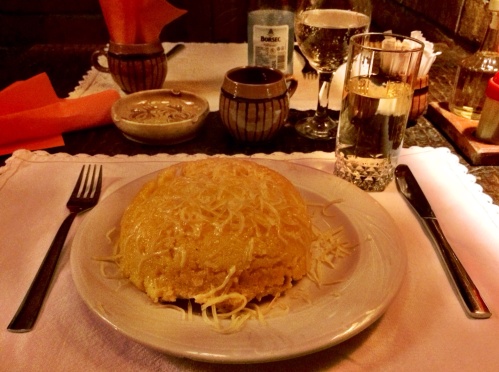 Mămăligă, a meal unto itself

Mămăligă: this is the Romanian answer to polenta; boiled cornmeal that is the very cornerstone of Romanian meals. It is served plain or with butter, cheese or sour cream. I made the mistake of ordering it along with a main, thinking it would be like a side dish. What came out could have fed me for days: a veritable steaming mound that had layers of cheese melted within in. I’d gladly be a peasant to eat this every day. 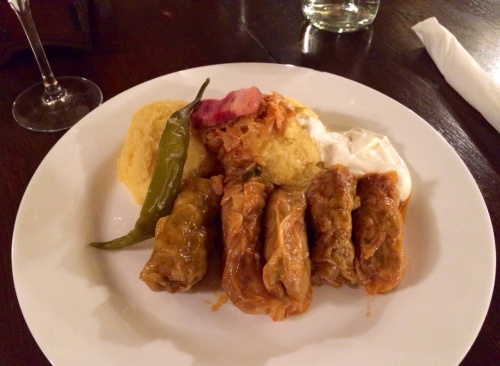 Sarmale served with mămăligă, sour cream and a chilli pepper

Sarmale: I am no stranger to cabbage rolls. In Greek cooking we have lahanodolmathes which are delicous cabbage wrapped parcels of rice and meat, cooked and doused in an avgolemono (egg and lemon) sauce. So the bar for me is set very high (especially if it’s yiayia’s lahanodolmathes we’re taking about), but I’m always eager to try a variation. 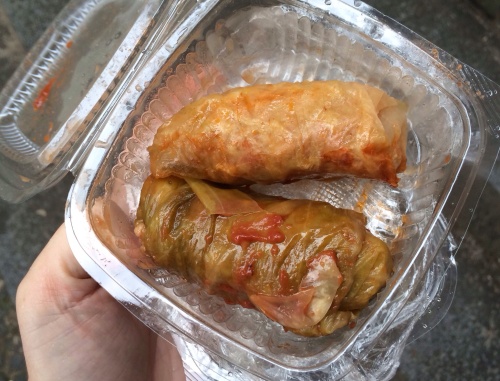 Even supermarket sarmale were tasty

Sarmale are different in that they use sour cabbage rather than fresh cabbage, smoked meat, and are covered in a tomato sauce. So the end result has a completely different flavour to what I’m used to but I really enjoyed the sourness and the smoky flavours. Apart from eating this in a restaurant I also tried the supermarket version which was so good (and so cheap) it became my train snack of choice.

So many delicious baked treats at every turn

Baked treats: I am incapable of walking past a bakery or street food stand without stopping to stare, salivate and more often than not, buy something on display. If I spy something I’ve never tried before then that’s grounds for immediate purchase. Even if I’ve just eaten. 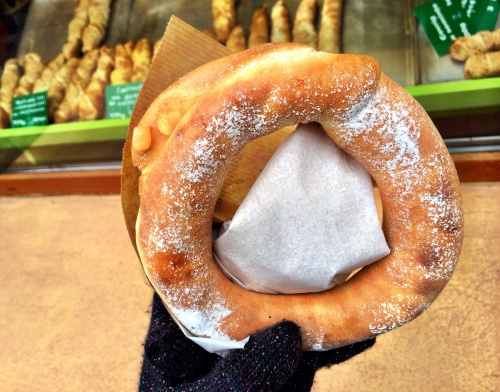 There are hole-in-the-wall bakeries dotted all over the towns of Transylvania and each one had a slightly different offering so I tried my fair share of pastries, cakes and other doughy creations. Some were disappointing, either bland or not as fresh as I’d hoped given I could see the oven working overtime in the background. 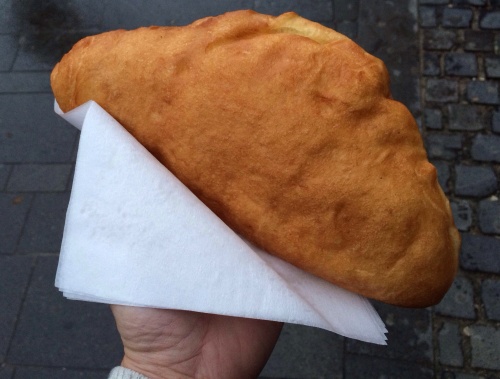 A giant pocket of fried dough stuffed with cheese

My favourite was from the town of Sibiu – a giant piece of crescent shaped dough, filled with salty cheese and deep fried. At 2 lei a pop (that’s less than €0.50) it was practically a meal, albeit not a particularly healthy one. 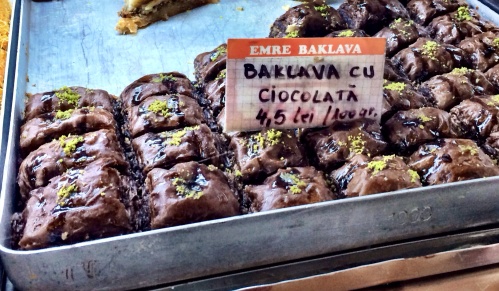 Baklava made with chocolate and soaked in chocolate syrup

Baklava. If ever a food had an identity crisis this would have to be it. The Greeks claim to have invented it. The Turks swear it’s theirs. The Armenians perfected it. No it was the Lebanese.

Whatever. As long as I can eat it I’m happy. There’s plenty of it around in Romania and what excited me most was the not-very-traditional-but-genius chocolate version. 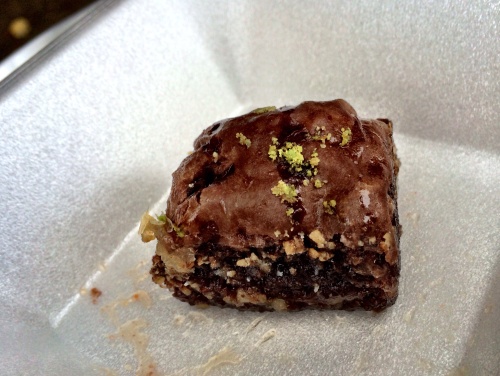 I also spotted this years ago in Istanbul but have never seen it elsewhere. A bastardisation for sure but the combination of filo pastry, nuts and chocolate syrup was fantastic. 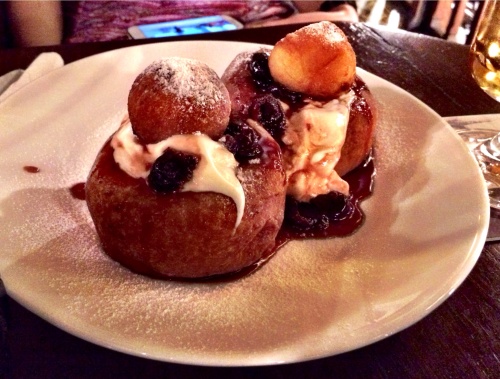 Papanași: Every cuisine seems to have a variation on fried sweet dough (loukoumades, beignets, kleina, churros…) and I’m yet to find a variation I haven’t loved. Papanași are Romanian doughnuts made from a mixture of sweet cheese, eggs and semolina, fried and served with sour cream and fruit syrup or jam. Very heavy but very delicious. They are a popular dessert in restaurants but I would not recommend eating this in conjunction with mămăligă unless you have been fasting for three days. 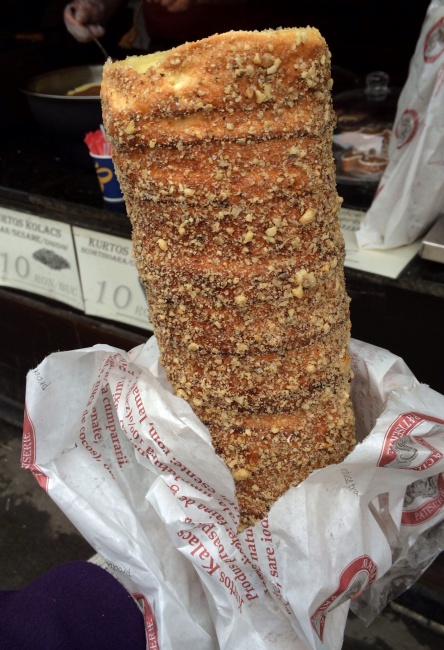 Kürtőskalács from its true home in Transylvania

Kürtőskalács get an honourary mention even though they featured in their own post recently. They originate from Transylvania which was of course part of Hungary until 1918, so both the Hungarians and the Romanians lay claim to this unique pastry. After eating my weight of them in Hungary I thought it only fair to try one in its original home. It was more or less the same in looks, size and preparation. I chose walnut as I hadn’t seen this option elsewhere. 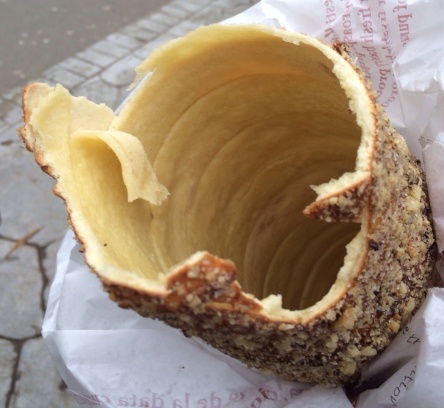 Why do I always end up with an uncooked inner layer in my kürtőskalács?

It was beautifully caramelised on the outside but once again had an uncooked layer on the inside. I’m beginning to wonder if this style of cooking over coals ever allows the kürtőskalács to cook through? This is keeping me up at night!

Has anyone else experienced Romanian food, either in Romania or elsewhere?