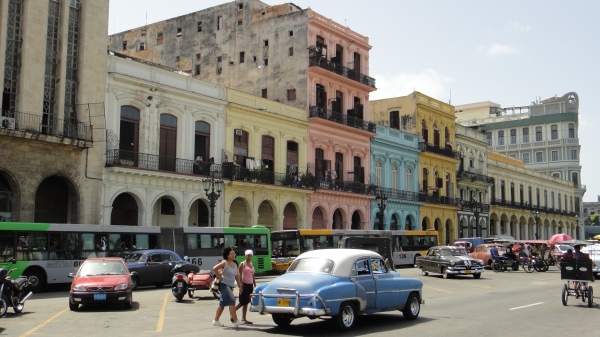 The bustle of downtown Havana

Exactly this time two years ago I was cycling around Cuba (sans padded bike pants – something I definitely don’t recommend) and taking in the lush countryside, communist signs (of which there are many) and salsa beats coming off every street. It was one of the most memorable travel adventures I’ve ever had. 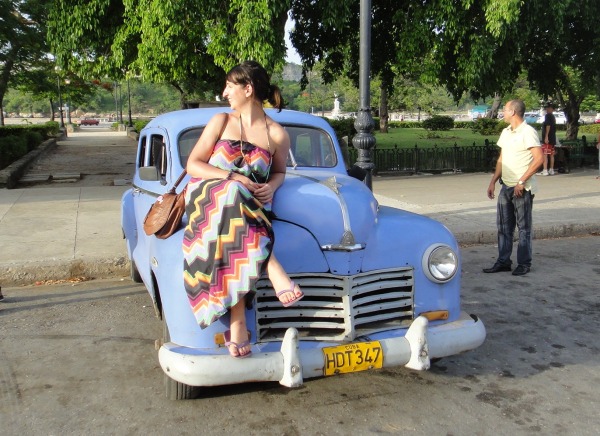 Doing my best to fit in with the locals 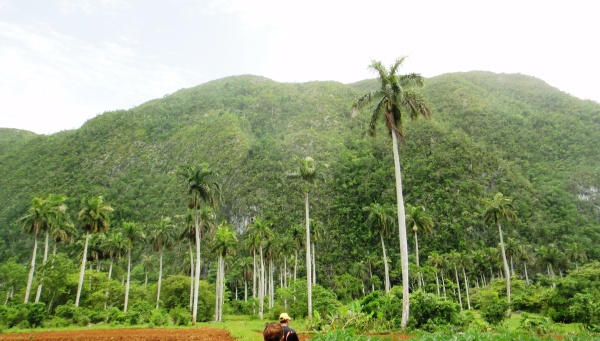 Cycling through the lush mountains of Pinar del Rio

I felt compelled to go before it was too late. Before the Cadillacs disappeared and the Castro’ had their last days in office. That sentiment is even more relevant now that the Cubans and Americans have politically kissed and made up and the borders are opening. The country is fast catching up with the rest of the world, whether that’s for better or worse. 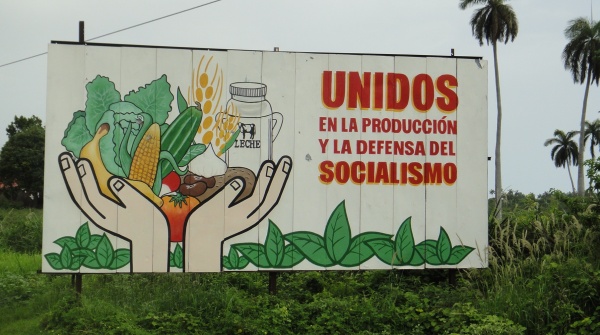 You can’t miss the socialist propaganda… 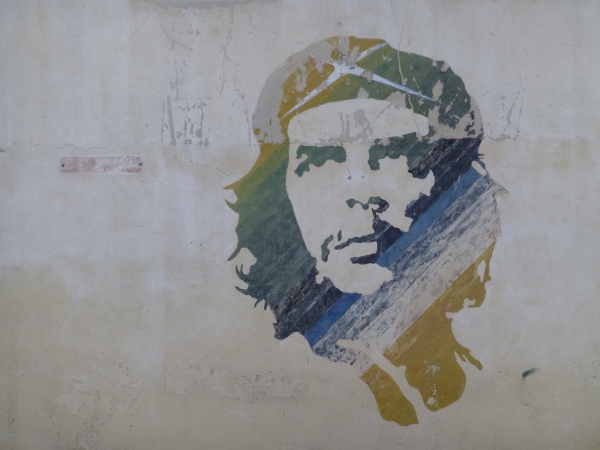 The legacy of that trip is still with me now, mainly in the form of salsa dancing which I’ve taken to like $2 mojitos (only in Cuba). I can’t say I brought back a truckload of recipes and culinary inspiration as I have from trips to Europe, Asia and Mexico (unless you count variations on the mojito), but I certainly embraced the food offering in Cuba, if only because it is so unique. 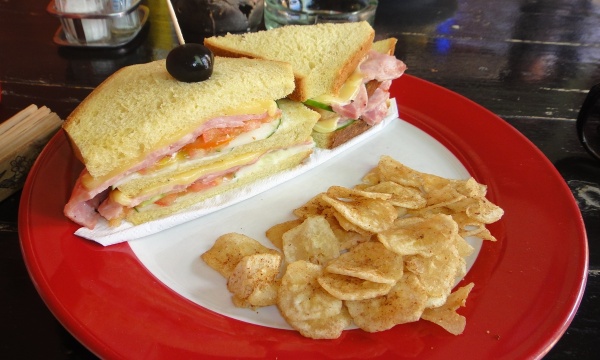 My upteenth ham and cheese sandwich

So what was the national dish of Cuba? Well after two weeks I surmised that it was the toasted ham and cheese sandwich. Because they were EVERYWHERE. Every hotel, every street corner, and the only item of food one could buy at the airport.

Of course when staying with locals in a casa particulare, you are treated like royalty, to the best standard that your host can afford. Having a casa license is like gold in Cuba and hosts are careful not to step a foot wrong. So a meal at a casa is a showcase of the best food the host has access to. The meals are humble but tasty. 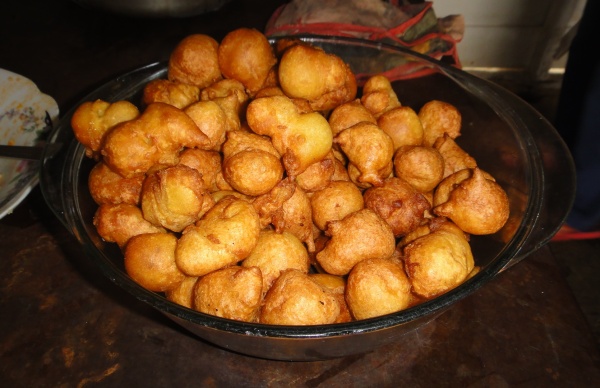 Home cooked meals are the way to go in Cuba. The restaurant scene is fledgling to say the least, although this is changing. Ingredients have historically been difficult to source while regular power failures and government intervention don’t help. 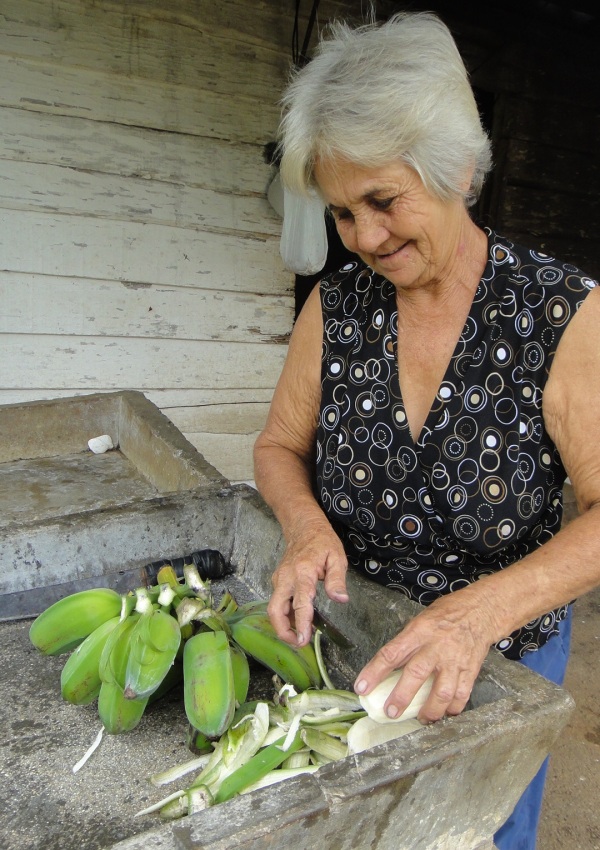 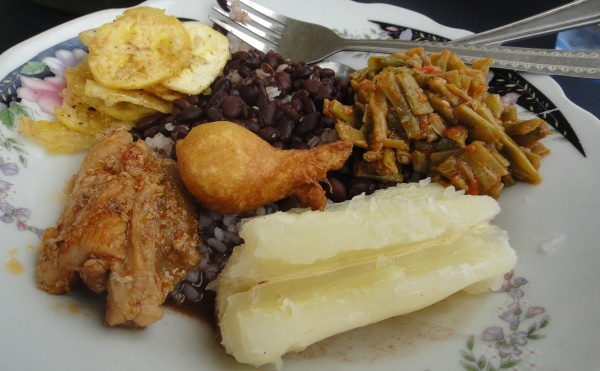 One of my favourite meals was enjoyed halfway through an intense day of cycling through Pinar del Rio. We stopped to visit Louisa at her rustic farm which included tobacco drying fields. The meal and its presentation typified Cuba – rice and beans, corn soup, braised pork in spices, green beans (reminiscent of Greek fasolia), yuca (the root vegetable also known as cassava), plantain chips and fried dough balls.

And her enviable collection of saucepans

As a thank you, Cubans prefer goods rather than a tip because they have access to very little in the way of imports. So my makeshift gift of hair clips, batteries and tea bags was a winner with Louisa. 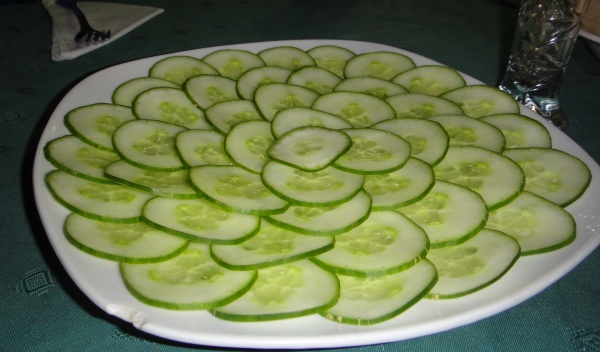 The basis of most meals is meat and rice or potatoes. Accented with ‘salad’ which can literally be a single ingredient offering – like a plate of sliced cucumbers.

Guava paste and cheese is the classic Cuban dessert

One of the quirks I came to love was the ubiquitous plate of ‘cheese and jam’ we received after most meals. Sounds strange but in fact you’ve been eating a variation of it for years – quince paste and camembert for example. This version was a little more rustic though, usually a big splodge of runny quince jam nestled next to a slice of mellow cow’s cheese. I loved it – the sweetness of the jam sits beautifully with the creamy cheese and Cuba is not the only place you’ll find this combo.

I wish I’d brought back even more Cuban guava paste

Guava paste is pretty much the only packaged food produced in Cuba so I stocked up big time before I left. Tropical fruits were a huge draw card for me too and I insisted we stop at every roadside fruit stand we encountered. 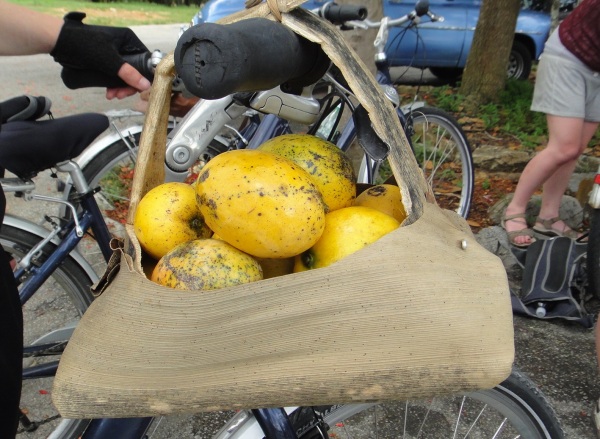 Mangoes for energy during our days of cycling

The pineapple was the sweetest I’d eaten and the mangos were fabulous too – although I still remain loyal to good old Kensington Prides.

The roadside was also great for picking up a snack, whether it be fried dough balls or sweets. 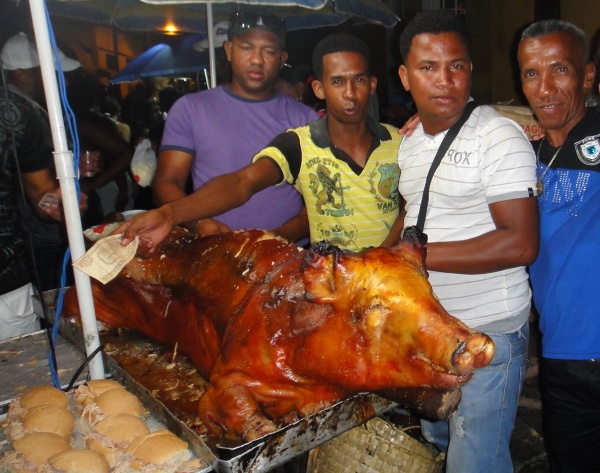 My local friends and their impressive spit roast pig

Mojito or Sexo the Beach?

I was lucky enough to come across a street party in Trinidad and taste some delicious dishes including roast pig on the spit and plantain chips (I could never get enough of them). And of course a ‘Sexo on the Beach’ to wash it all down.

Cocktails are the lifeblood of Cuba thanks to all the rum and they were cheaper than water. Mojitos and daiquiris are the order of the day and Havana Club has almost as big a presence in the country as Castro.

Some famous writer once said: ”My mojito in La Bodeguita, my daiquiri in El Floridita”

Well Hemingway was a bit of a rock star in his day so who was I to argue? I wrote about the daiquiris at El Floridita  and now let me tell you about the mojitos at La Bodeguita del Medio.

I was a little suss to begin with. I mean there used to be a La Bodeguita del Medio in Sydney which effectively made it a chain so how special could it really be? Well certainly this original outpost is unique, if only because it is the size of a studio. It fit twenty people at best, with about another twenty vying to get in.

Those immortal words by Hemingway

The mojitos are expensive (for Cuba), at around 5CUC or $6AUD each. But there was Hemingway’s signature, taking pride of place on the wall. We were in the presence of greatness, plus an awful lot of tourists. We had our requisite cocktail but then high tailed it out of there. All mojitos are good mojitos in Cuba so why pay inflated prices?

These cocktails cover any drink order

“An intelligent man is sometimes forced to be drunk to spend time with his fools.”

Whatever you say Hemingway.