A bowl of yiayia’s avgolemono

Anyone not Greek right now is struggling. It’s okay you can admit it.

Maybe not as much as the time you encountered galaktoboureko, but similar territory.

It’s not only a long word with far too many vowels but there is a silent letter that just throws the entire thing out of whack.

See it wasn’t that hard. My recommendation is that you become familiar with this magical soup because it’s an absolute winner and if I had to consume nothing else all winter long I’d be a very happy girl.

So what is it? If you break it down it’s quite simple

Egg and lemon soup. When I get to this point of the explanation I usually get strange looks.

Egg in a soup? How does that work?

Meat and vegetables from the stock are served alongside the soup

It’s quite an unusual concept but once you try it you’ll be sold. The base of the soup is chicken stock (or lamb or fish) and this has to be made from scratch with fresh meat or bones, carrots, celery (personally I prefer leeks) and bay leaves. The meat and vegetables later become a side to the soup. Then you add rice. So far so good.

In a separate bowl you beat eggs and combine them with fresh lemon juice.

No we’re not making a cake. This frothy mixture is the secret to making your soup creamy (without a drop of cream), rich and delicately scented. This egg and lemon mixture makes appearances in a whole host of Greek dishes, from fricasse to lahanodolmathes. It’s the roux of the Greek world.

The trick though, is not to dump the whole thing straight into the stock. Do that and you’ll get instant scrambled eggs. You must carefully add ladles of hot stock to your egg and lemon mixture so all parties can slowly acclimatise. Only then can you add the egg and lemon mix to the soup.

The result is a rich broth where the citrus dances on the palate, the rice provides ballast and the egg brings a richness to tie it all together.

It takes on the same role in Greek society as traditional chicken soup – it’s the concoction that will soothe that oncoming cold, give you strength and make the world a better place. If I even hear whispers that someone might have made a pot of avgolemono I’m there before you can say egg and lemon soup. 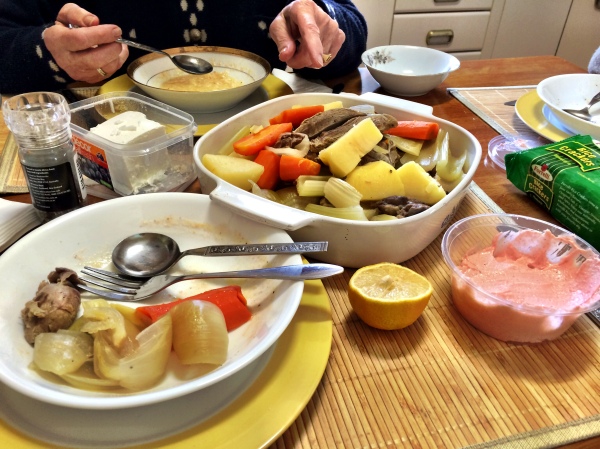 It’s also the highlight of Greek Easter celebrations. Traditionally magaritsa soup, a version of avgolemono made with lamb offal, is eaten to break the fast of Lent after midnight mass. I’ve never really fasted properly (how much fun would a blog about The Fasting Foodie be?) but could actually stomach the idea knowing that a steaming bowl of avgolemono was at the end of the pain.

I can’t wait ten months for Easter to roll around. Time to call yiayia…