Lentil as Anything in Sydney’s Newtown

It’s extremely hard to make money in the restaurant business. Often the most creative and technically brilliant chefs are not adept businesspeople. Being the hottest new chef with a swag of awards doesn’t help either. A full restaurant does not equal a profitable restaurant.

My point is that pricing in restaurants is crucial – it has to strike a balance between covering costs and not scaring customers away with a $25 starter of bread and olives.

Lentil as Anything has a pared back, student vibe

If pricing can make or break a restaurant then what happens when a restaurant comes along with no prices? Enter Lentil as Anything, a pay-what-you-can-afford, not for profit vegan restaurant that leaves the maths up to the customer. The restaurant is built on the idea that “everyone deserves a place at the table” and wants to offer everyone a positive dining experience, regardless of their financial state.

It’s a concept that made waves when it opened in Melbourne originally and then Sydney’s Newtown and begs the question – what do people do when paying is off the hook?

What would I do?

The succinct menu for the evening

On the Wednesday night I visit with friends Ving and Bel, the place is packed. And everyone appears to be south of 25 in student-style attire. We ­could be in a uni canteen.

There are four mains on the menu, plus chai tea and one dessert.

The restaurant’s philosophy and their tasty chai tea

We start with a small glass of chai which has much more depth and flavour than the sort of chai you usually get in cafes these days. It appears not to be made from powder which is an automatic win in my book.

The mains on offer for the evening are: Moroccan tagine with black eyed bean couscous; creamy cashew and mushroom spaghetti with garlic bread; spicy roast cauliflower, pepita and spinach salad and ratatouille with rice and garlic bread.

Once a dish sells out, that’s it, so getting in early is advisable.

With all the dishes pre-prepared, our plates come out in minutes and the servings are big. No wonder our waiter advised us against ordering the salad to share. There’s a big focus here on only taking what you need – a good reminder for overly-enthusiastic eaters like myself.

My tagine reminds me exactly of something I would make at home mid-week, meaning it was tasty but not amazing. A bite of Ving’s pasta reveals a similar story there.

Why not? This time it feels more like school camp when square pieces of banana and strawberry cake are placed in front of us, some bigger than others. It’s simple, wholesome and just right for the setting we’re in.

Live music is an unexpected touch

The lovely strumming by guitarists at the side of the room belies the quick pace of the service – we are done in less than thirty minutes and with people waiting hungrily outside, it’s not a place for lingering.

No bill appears. We put our heads together to talk money. At this point we could legitimately just leave. It’s not a thought we entertain for a moment, but it’s strange to think we could. 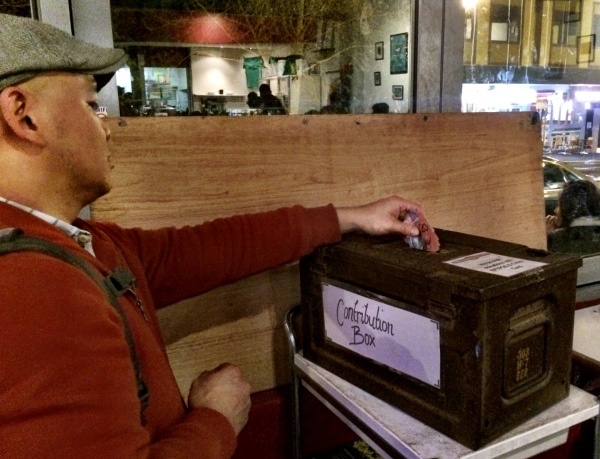 Optional payment is through the Contribution Box

Between us we leave just under $50 in the contribution box at the front and no one bats an eyelid. We feel somehow like we’ve done a good deed – with most of the food donated and staff working as volunteers, it means our money is supporting those who can’t afford to pay (we hope), as well as the many refugees who work on the floor.

There are definitely flashbacks of the uni canteen

Of course a concept so radical doesn’t come without its pitfalls. In the past, other sites have gone through phases of losing money when punters (like drunk festival-goers who are deemed able to pay), pay little or nothing at all.

It’s been reported in the past that $12 per customer is enough to cover costs. If that’s the case then we effectively bought a meal for a fourth silent partner that night. I just hope it went to someone who really needed it.