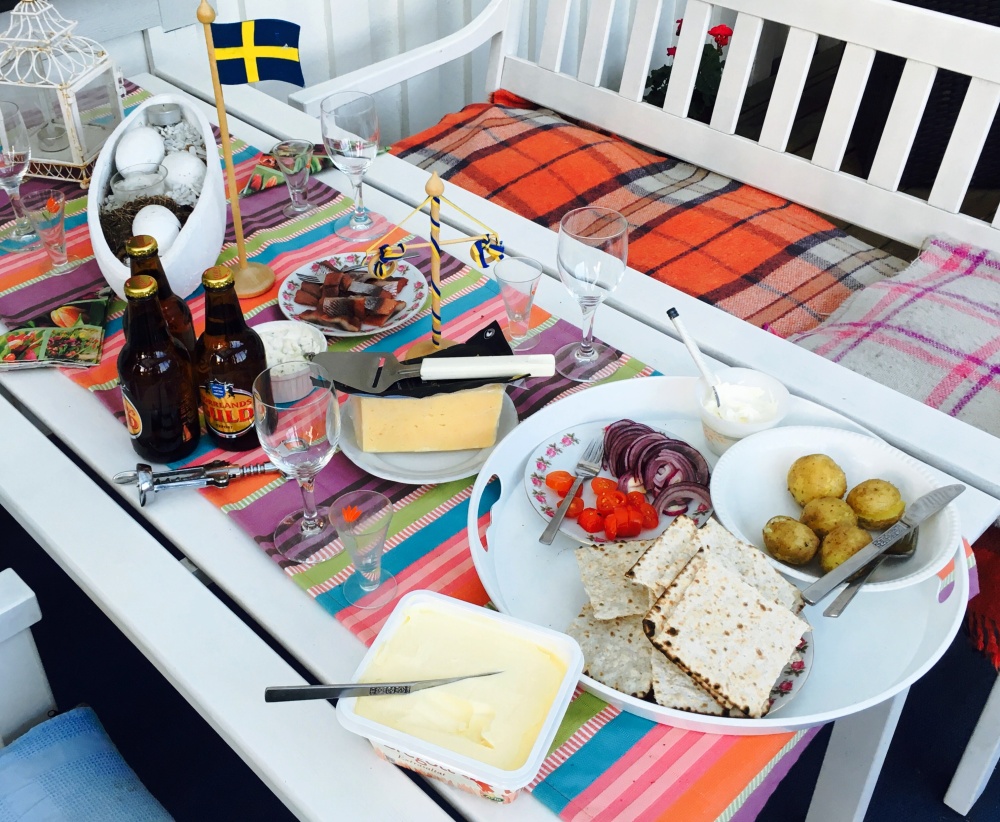 The table is set in a typical Northern Swedish household

If you’ve come this far then you’ve certaintly sampled the obvious highlights of Swedish food.

But this cuisine gets so much better, and more creative, the more you delve.

On my last trip to Sweden I veered north and stumbled across some particularly unique delicacies which were most entertaining. 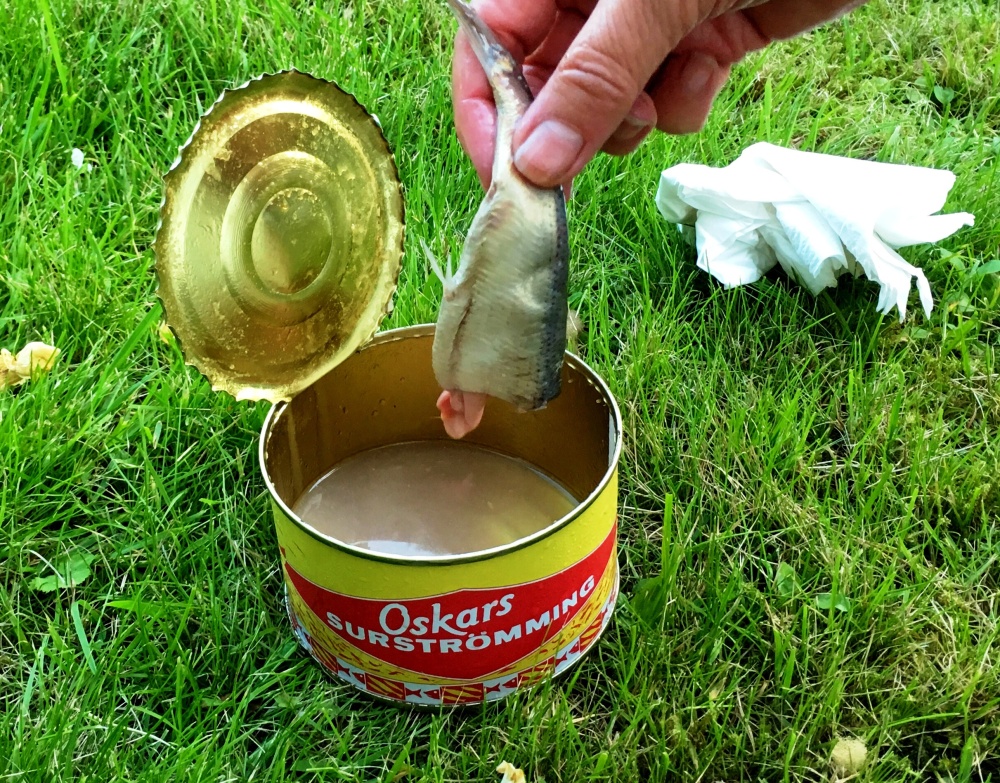 Freshly opened surströmming – strategically opened outside on the grass.

My adopted Swedish mother Ing-mari made me feel like her third child the moment I stepped through her door and had a suite of Northern Swedish delicacies lined up for me to try, starting with the extremely polarising surströmming. Now some say this fermented Baltic Sea herring is the smelliest food in the world but I know that isn’t true because that honour goes to Icelandic fermented shark which I can guarantee you will have you retching from 50m away. 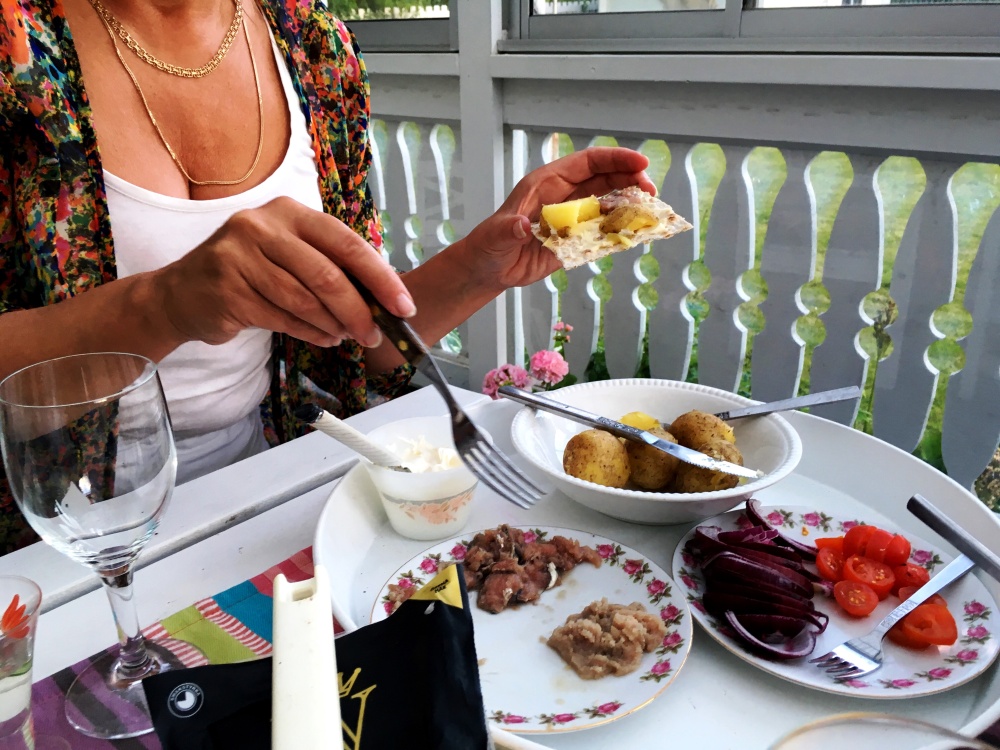 Ing-mari shows me how it’s done

The Baltic herring used in surströmming is fermented for six months then stuffed in a tin to give the salty fish a sharp sour flavour. The smell is so pungent that there’s an unwritten law that a can must only be opened outdoors and far away from neighbours. When I arrived in Hemmanet outside of Sundsvall the said can was already ‘resting’ on the grass in preparation for our meal. 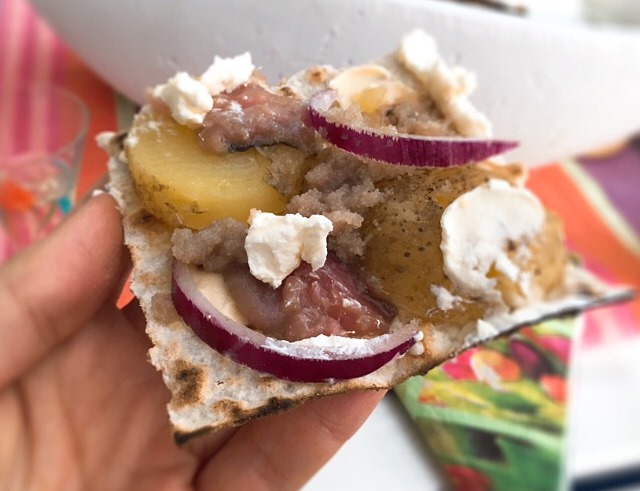 The combination of flavours and textures on this rye bread make the surströmming sing!

Ing-Mari served the surströmming on crisp rye bread with butter, slices of boiled potatoes, sliced red onion, caviar and sour cream. I found it delicious! And not just because it caved under the weight of the accoutrements – I tried some solo and really relished the tangy taste washed down with aquavit.

The curious creature that is the smörgåstårta

When I see something edible for the first time my eyes go wide, I get really excited and MUST TRY IT IMMEDIATELY. No one knows this better than my dear Swedish friend Joakim who has patiently indulged my foodie obsessions over many Swedish road trips.

It was on the latest that I spotted a strange construction in a supermarket. It was embellished like a cake but appeared to be made of savoury ingredients.

‘Oh yes’ said Joakim casually. ‘That’s a sandwich cake. They were very big in the 80s, my mum used to buy them’. 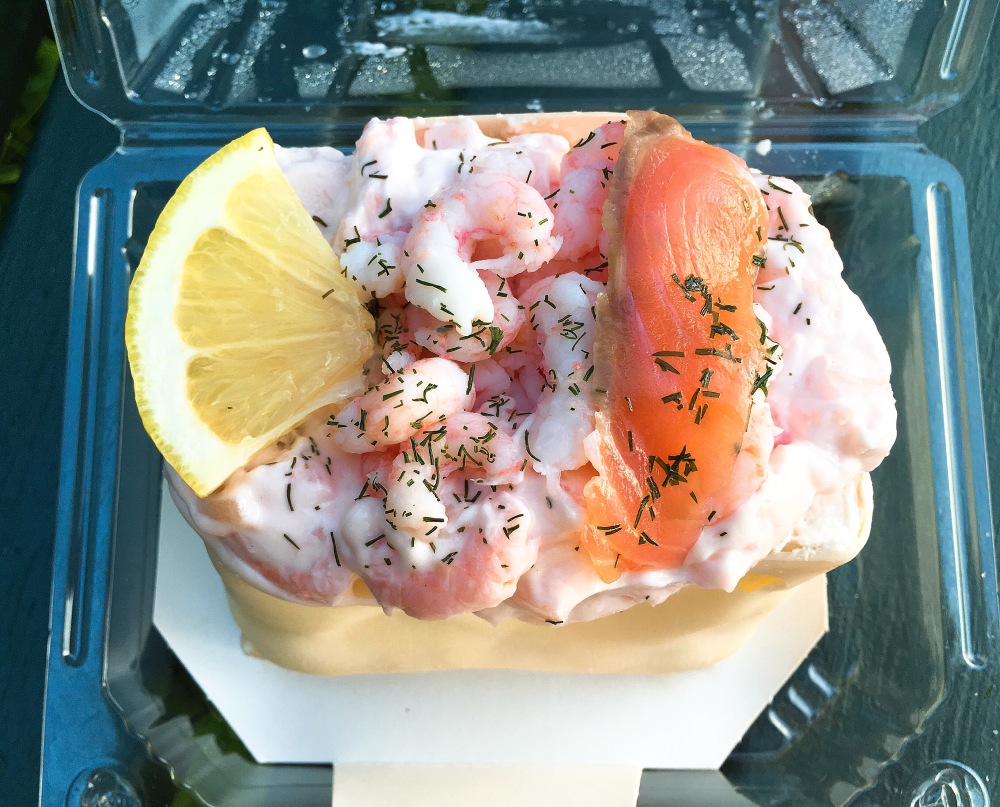 A take-away smörgåstårta from supermarket ICA

Known as a smörgåstårta it’s constructed like a layered cream cake but instead made with rye bread and savoury creamy fillings. 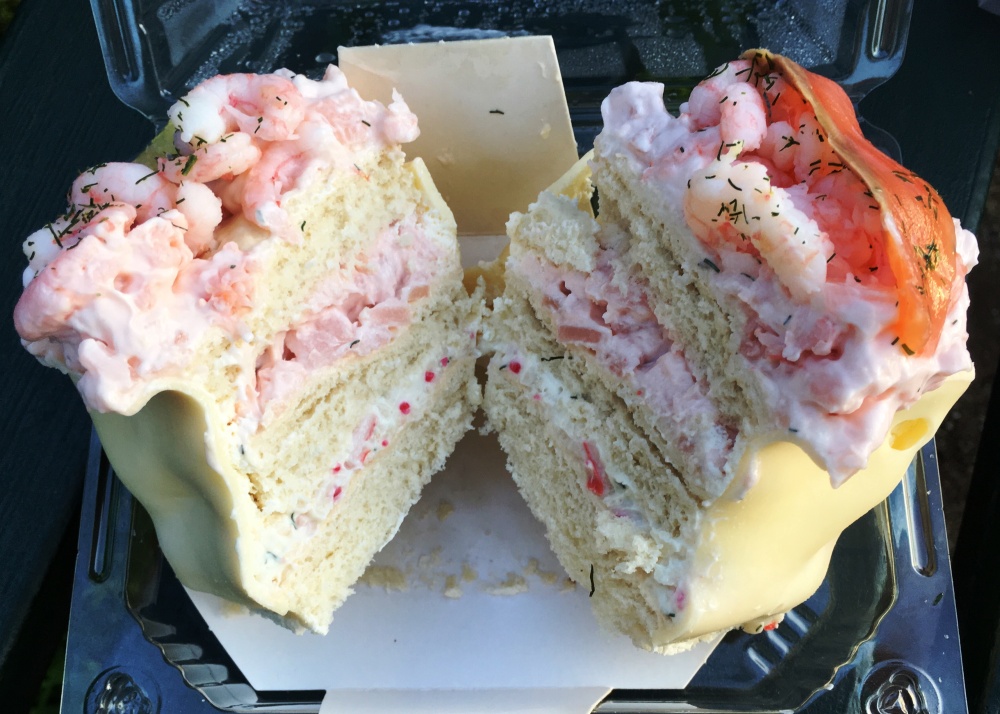 Inside we found layers of layers of prawn and crayfish mixed with mayo.

Whilst they can feed seemlingly thousands, the one I tried was a more demure size with layers of prawns, crayfish and mayo, embellished with salmon and prawns and draped with sliced cheese. So retro but so tasty! 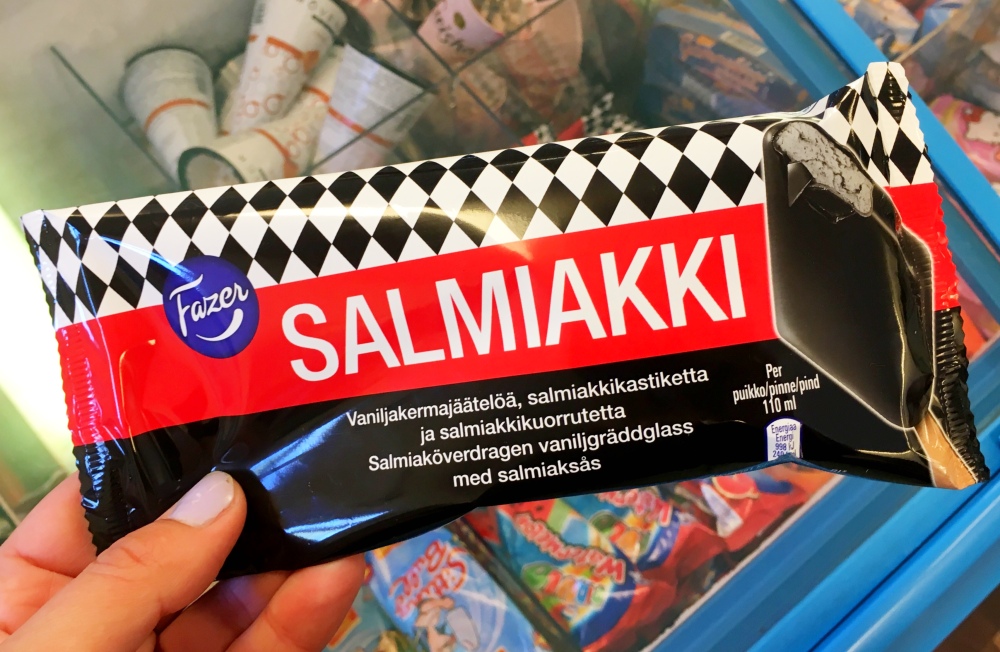 I’ve long known that the Swedes (and all the Nordic lands) are batty about their liquorice and I still remember my delight in discovering salty liquorice. However the ice-cream iteration was not something I was prepared for so I literally cried in delight when I stumbled across it in a little shop on the island of Grinda with my friends Johan and Veronika (disclaimer – while I ate it in Sweden it’s actually produced by a Finnish company called Fazer).

Not only delicious but the packaging and shape of the ice-cream are, in typical Nordic fashion, stylish and cool.

Liquorice haters need not apply for this one as you get a double whammy of liquorice ice-cream and a liquorice shell. The ice-cream was beautifully smooth and the texture balance just right. I never thought grey food could be so fun. Plus the packaging is your typical Scandi cool. I WISH I could track it down in Sydney.

A slice of elegant princess cake is a mainstay of Swedish fika time.

My (non-Swedish friend Deb) first brought this cake to my attention as it had been featured on The Great British Bake Off. And what’s not to love about a sweet treat that’s as green as Kermit? 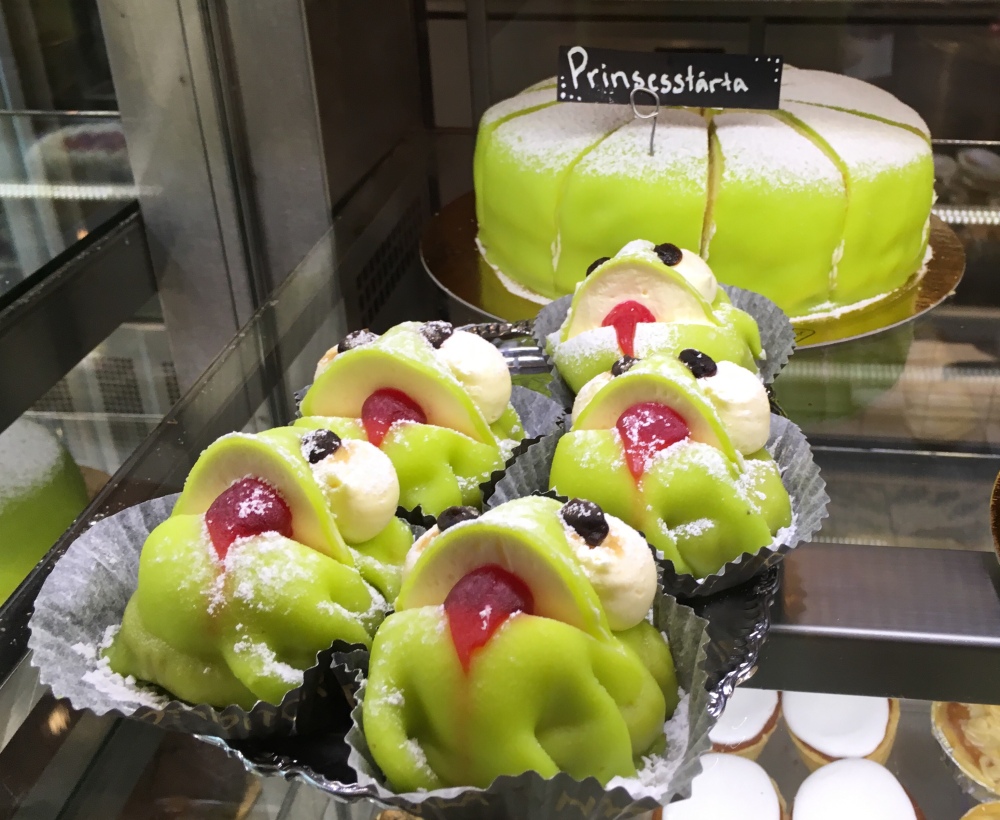 Take your prinsesstårta as a whole cake or as individual frogs – it’s your call.

A princess cake or prinsesstårta is a traditional Swedish cake made with layers of  sponge cake and cream, shaped into a dome, topped with green marzipan and sprinkled with icing sugar. It’s a very distinctive cake, not to mention delicious. Once it was on my radar I had to try it in every town and I quite like the creative variations. Mini frog prinsesstårta anyone? 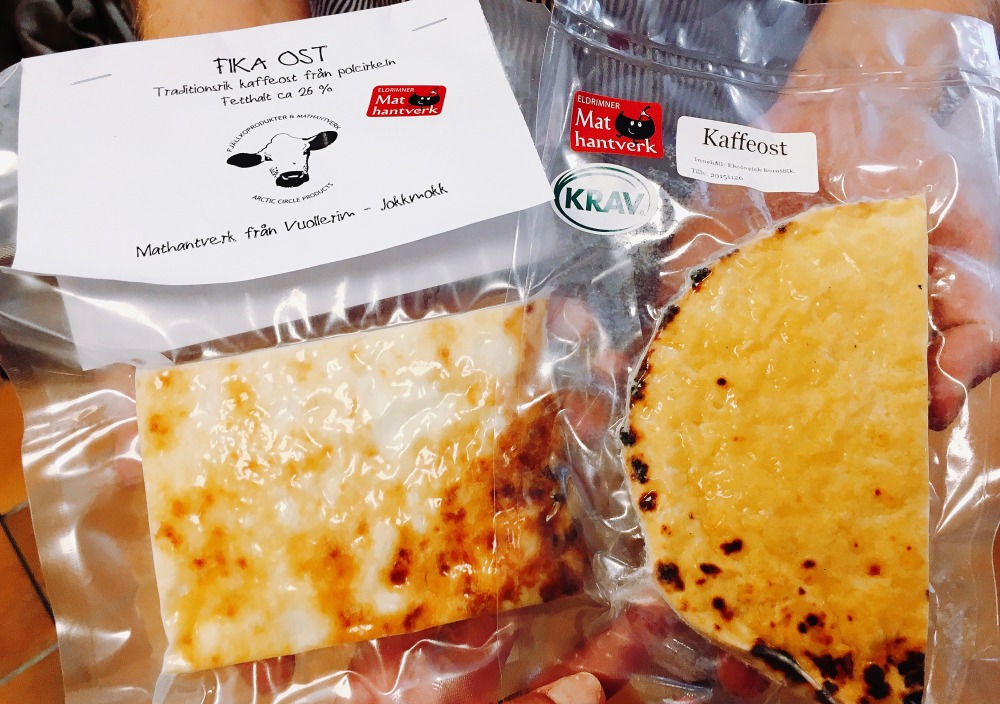 I’m the last person to discriminate against dairy, especially cheese. But I did slightly baulk when informed about coffee cheese that is a stalwart of Northern Swedish diets. It sounded like an oxymoron to me – how could one eat coffee with cheese, in the same mouthful?

All the ingredients for a proper kaffeost experience

Kaffeost (literally meaning coffee cheese) is a fresh cheese made from cow or reindeer milk which is curdled and set in a round disk then baked to give it its distinctive charred marks. I spotted it in the northern town of Piteå then finally tried it on our last day in Umeå.

Did it taste like a mouthful of tiramisu as some claimed? Well no. In fact I’d venture to say the ingredients work better solo than in a relationship. However I can imagine being in the north during winter and not exactly inclined to milk a cow for my coffee so in this instance the cheese would do the trick for a creamy dairy kick.

Best name for a cake ever right? I mean who wouldn’t want to eat a vacuum cleaner. Swedish dammsugare literally means ‘dust sucker’ and the name derives from the supposed tradition of using yesterday’s cookie crumbs (from the floor of course – thus the requirement for a vacuum cleaner) as part of the mixture along with punch liqueur, butter and cocoa powder. The outside is covered with, you guessed it, green marzipan and each end is dipped in chocolate.

Coffee and a vacuum cleaner. Standard in Sweden.

It’s quite a striking sweet. I pounced on one when I first went to Sweden, unused to anything of a sweet nature coming in green. I’ve since spotted them at my local IKEA which somewhat curtails their mystery but I would still prefer to enjoy one with my fika over in the homeland.